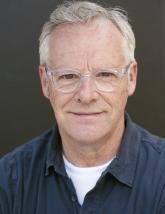 Matt Goldman is a New York Times Best Selling Author and Emmy-award winning television writer. He began his career as a stand-up comedian while attending the University of Minnesota. Shortly after graduating, he moved to Los Angeles where he began writing full-time. He wrote two seasons on Seinfeld, one as a Staff Writer and the second as a Story Editor. Matt wrote three years on Diane English’s Love & War, serving as Story Editor, Producer and Supervising Producer. He then wrote on Ellen for two years, as a Consulting Producer and Co-executive producer. Matt also wrote for NBC’s Working and Three Sisters, serving as a Consulting Producer on both shows.

Matt’s first novel, Gone to Dust, was published in the summer of 2017. It was followed by Broken Ice in 2018 and The Shallows in 2019. Dead West, the fourth in the Nils Shapiro series, will be published in summer of 2020.

His play Bunk Bed Brothers, which he co-wrote with Pat Hazell, has run in numerous cities and received critical acclaim in the Los Angeles Times, Minneapolis Star and Tribune and other newspapers.

Matt won an Emmy Award for his work on Wizards of Waverly Place, was nominated for a Writer’s Guild Award for his work on Seinfeld and received special recognition from the Academy of Television Arts and Sciences for his contribution to THE Puppy, the Emmy award winning episode of Ellen in which Ellen DeGeneres’s character came out.

Matt’s first novel, Gone to Dust, was nominated for both the Nero Award and Shamus Award and made the New York Times Best Seller list.

Twenty-five years as an emergency doctor in busy inner-city, level-one trauma ERs provide Tom Combs background for his gripping stories. His books immerse readers in the blast-furnace emotions of life-or-death action, and expose crime and intrigue in the worlds of medicine, law, and big business.

Nerve Damage, his debut thriller, is the story of young ER Dr. Drake Cody and his family as they are swept up in high-level intrigue and edge-of-your seat suspense. Murder, greed, and renegade agents of the trillion-dollar pharmaceutical industry place everyone Drake cares about in peril. Hard to Breathe is book two in the Drake Cody series and
Wrongful Deaths is his last book.

Tom received his MD degree from the U of MN Medical School and did specialty
training in emergency medicine at Hennepin County Medical Center and the
University of Cincinnati. He performed as an Air Care Physician for three years and spent the last two decades of his medical career working as an emergency physician in the high acuity, level one trauma ER of North Memorial Medical Center in Minneapolis.

Tom lives with his artist wife on a lake in his beloved home state of Minnesota
where he loves to swim, bike, hike, fish, read and have as much fun as possible.

David Durenberger served as senior U.S. Senator from Minnesota from 1978 to 1995. He was elected to succeed Hubert and Muriel Humphrey and was the first Minnesota Republican ever elected to three terms in the Senate. Senator Durenberger’s health policy experience extends over three decades.

Senator Durenberger is the Senior Health Policy Fellow at Opus College of Business at the University of St. Thomas, and chair of the National Institute of Health Policy. He authored Prescription for Change, a book on healthcare reform through consumer choice, and is an accomplished speaker on the subject.

Lori Sturdevant is a native of Dell Rapids, SD, and a graduate of Coe College in Cedar Rapids, Iowa. She has been a member of Coe’s board of trustees for 30 years. Lori Sturdevant lives in St. Paul with her husband. They have three grown children.

She retired from the StarTribune Editorial Board in December, 2018 and is now an occasional columnist for the paper.

Anne Marie Ruff has spent her whole life telling stories: as a novelist, journalist, radio broadcaster, editor, teacher, and actor. She has spent much of her adult life traveling the world, living abroad, and asking questions in search of stories worth telling.

Born in Minnesota, she attended Blake Upper School before moving to Los Angeles to study geography and environmental studies at UCLA. She worked as a journalist, based for several years in Bangkok, Thailand, and Abu Dhabi in the United Arab Emirates. Her work has been published/broadcast by NPR, BBC, PRI, PBS, Christian Science Monitor, Time Asia, Far Eastern Economic Review, and International Herald Tribune TV.

Anne Marie’s first novel, Through These Veins, about the development of a cure for AIDS, drew on her reporting about the environment, biodiversity, biotech, and AIDS research, in Thailand, Ethiopia, and Turkmenistan. Her second novel, Beneath the Same Heaven, examines the conflict between Islamic and western culture through the microcosm of a marriage torn apart by terrorism. The story reveals insights drawn from her own experiences of cross-cultural marriage and living in cultures with a revenge-based sense of justice.

Anne Marie works as the editor for a global law firm. She has returned to Minnesota where she lives in the big woods with her Indian born-and-raised husband, and their two sons.

Gregory Blake Smith is an award-winning author of four novels, including The Maze of Windermere and The Divine Comedy of John Venner, a New York Times Notable Book. His short story collection, The Law of Miracles, won the Juniper Prize and the Minnesota Book Award. He has received a Stegner Fellowship at Stanford University and the George Bennett Fellowship at Phillips Exeter Academy and grants from the National Endowment of the Arts, the Bush Foundation, and the Minnesota State Arts Board. Smith is currently the Lloyd P. Johnson-Norwest Professor of English and Liberal Arts at Carleton College.

The Maze of Windermere, Gregory Blake Smith’s staggeringly brilliant new novel, luxuriates in those demarcations of time. It is an extraordinary demonstration
of narrative dexterity. Moving up and down through the strata of history, Smith captures the ever-changing refraction of human desire.

Julie Schumacher grew up in Wilmington, Delaware and attended Oberlin College and Cornell University. She is the author of ten books, including The Shakespeare Requirement, one of the Washington Post’s 50 Most Notable Works of Fiction 2018, and Dear Committee Members, a national bestseller and the winner of the Thurber Prize
for American Humor.

She is the first woman to have won the Thurber Prize. Her stories and essays have appeared in The New York Times, The Atlantic, The Best American Short Stories, The Chronicle of Higher Education, and other publications.

She is a professor of Creative Writing and English at the University of Minnesota.